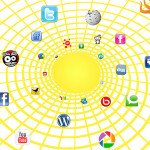 Starting around 2008, many organizations’ human resources departments needed to eliminate their own staffs, and thus many of the traditional human resources functions got bounced over to the respective hiring managers. Unfortunately, those discrete departments couldn’t always afford expensive job boards, so they needed to think out of the box in order to meet their staffing needs. That need accelerated the use of social media for staffing purposes. At the same time, recruiters, too, felt the same financial pressure, and the result was that 80 percent of them started using social media as well for the same purpose. That new reality was welcomed by practically all sides because it facilitated two-way communication. Plus, social media enabled seeing applicants not only in terms of their skills such as via résumés but also in terms of revealing their personalities for assessment of cultural fit. From a candidate’s point of view, it represented mostly an advantage, but at times, it backfired.

The advent of social media as a staffing medium from the recruiting vantage point as well as a networking tool for candidates necessitated learning to use new tools. And not only that, but the tools are continually evolving, with new ones frequently surfacing to make the old and familiar ones instantly obsolete.

Despite the steep learning curve, however, candidates welcomed the new medium—in many cases if for nothing else because they did not have to meet people in person. In the American culture, as opposed to certain other cultures people typically feel uncomfortable initiating communications with someone else, especially if the two have not been introduced by a third party. Online networking provided candidates with several advantages: it’s free; it allows researching the other party before even initiating a first communication; it’s learned quickly; it’s relatively easy to use; and, if applied right, it’s effective.

Networking is all about building mutually beneficial relationships, but it’s practically worthless unless the other party is willing to refer the first party further—to other people. Since networking is time-consuming, the introduction of efficiency tools into the process is reasonable. Several free tools are worth exploring. Gist.com and Batchbook.com are robust and can help those who want to put some time into learning how to use them. Both of those tools are modified customer relationship management tools, with heavy emphasis on social media such as LinkedIn, Twitter, and Facebook.

Logically speaking, extensive networking is virtually impossible to carry out while people are employed, even though it’s very important to keep doing and is time-consuming. However, when people are in transition, networking is an absolute must. People will not remember you unless you remind them of yourself periodically. An efficient way to do that is via a program called MailChimp.com. Once it’s been set up, this program is easy to use and can potentially prove very useful as a social networking tool.