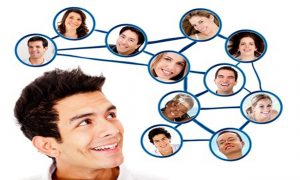 Networking is all about relationships

My name is Jane Jones. Our mutual acquaintance Stan Smith
suggested I give you a call [or send you an e-mail] because he feels
you’re an expert in [whichever] industry. Stan suggested
you might be of assistance to me. I’m currently in between jobs and looking for a role as a [insert title/position]. I don’t expect you to know
of an opening in this area, but perhaps you can share with me
your thoughts about ways I can find out who’s hiring.

The mechanics of a networking dialogue should have the following components. An initial rapport building to establish the relationship. An agenda for the purpose—and that consider how you, too, can add value. Try finding out whom the other person knows or what good contacts the person has. Another element is likability. You must develop your relationship on trust, integrity, and show of enthusiasm, motivation, and drive. Nobody enjoys a conversation with someone who’s depressed—with the possible exception of a psychologist!   And last, get engaged in the exchange, and try to feel comfortable asking for referrals. When you get them, make sure you keep your host in the loop.