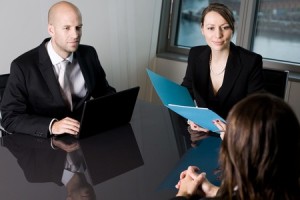 The interview is about availability and choice

From the interviewer’s vantage point, the selection process is about availability and choices. That principle applies to many things the rest of us do, too, throughout the day. For instance, isn’t it interesting that when a group of people dine together in a restaurant, some of them make their menu decisions within a few seconds, yet for others it takes an embarrassingly long time—and they’re still not perfectly happy with their decisions. The same principle applies to interviewers: I remember being interviewed years ago for 20 minutes and receiving the job offer on the spot; that was unusual at the corporate director level. At the other extreme, I heard of a person who was interviewed for a secretarial position by seven people over two months’ time—after the candidate had already worked in that department for three months as a temporary employee.

Predicting the outcome of the interview

To sum up, it is impossible to predict the outcome of a job interview because we simply don’t know what the interviewer’s decision-making process is. How often has a job candidate walked away glowing from an interview, with that feeling of having aced it, and yet the job offer never came.

At times candidates speculate about the best time of day to schedule a job interview—if given a choice. Early morning—before the pressure of the day builds up—might be good, but the interviewer might not be fully awake yet. Maybe just before lunch. But then, maybe after lunch would be better. How ’bout near the end of the day? There are no clear-cut answers because each case is individual and unique.

The interview outcome is relative to others

A recent National Public Radio program interviewed Wharton and Harvard business school professors who discussed the results of a large, 9,000-subject, 10-year study of interviewing. The investigators concluded that what matters is the candidate’s performance relative to those interviewed earlier. In their analysis, they also talked about a phenomenon called the gambler’s fallacy—a theory that says there is a mistaken notion that assumes that the odds of something with a fixed probability increase or decrease depending on recent occurrences. In other words, if you interview after two or three inferior candidates, your chances are better. This also works in reverse.

From my vantage point as an interview coach, I know that the only way to beat the odds is to prepare well and practice mock interviewing. Practice makes perfect.

1 thought on “The Interview: Why Wasn’t I Chosen!”