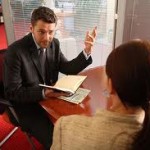 Job interviewing is an act. Yes, you are the actor, and both sides know the rules: You, who are one of the candidates for the position, are doing your best to convince the interviewer you are the ideal candidate. The interviewer, who is the audience, has choices, is an independent thinker and often skeptic, and needs evidence and proof before buying everything you want to sell. (Please pardon the mixed metaphor.)

The winner in this competition is not only the individual who, on the positive side, has good answers but also the one who, on the negative side, does not make mistakes. So let’s look at both of those issues.

What are positive factors in an interview?

What are negative factors in an interview?

So, in summary, what is the holy grail of the interview process? The answer is, it depends, because a large portion of the decision-making process is subjective and hinges on the interviewer’s consciousness, past experiences, personal culture, and intellectual world. What I’ve learned from performing job interview coaching for several years is that the most important success factors are extensive preparation via mock interviewing the building of self-confidence. Both of those are instantly evident to an interviewer.

1 thought on “Are You Really Good at Job Interviewing?”