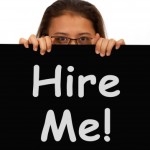 I use the title loosely and with humor. I know the majority of readers are neither clergy nor nobility, and it’s likely that neither are they highly privileged like that “1 percent”—a notion popular during the most recent presidential election. My point is that America is divided between those who are currently employed and those unable to obtain employment.

Regrettably, one side does not understand the other. People who are currently working are so focused on meeting supervisors’ expectations to protect their jobs that the things they hear in the media are only anecdotal and peripheral for them. Most of them are under unprecedented stress, and to relax, they socialize in bars and restaurants. Of course, they can afford to do that. In the area where I live, those who want to dine and socialize with friends in a restaurant must make reservations way ahead because most of the eateries are full to capacity. For those workers, the words recession and unemployment are ones they read or hear about in the media.

On the other side are people I commonly talk with who are truly agonizing and at their wits’ end because seemingly, no matter what effort they put forth, they can’t get themselves into positions that would gain them some income. And in fact there’s even a smaller, third group, made up of those who’ve taken on temporary gigs in order to make the few bucks needed to keep their heads above water—if they can. People in both of those groups—the unemployed and the part-timers—are surely going through an extremely difficult time in their lives. They feel deeply bitter, utterly frustrated, and quite lost because they simply don’t know what else they can do to get themselves out of their dire situations.

As a practicing career coach, I work primarily, but not exclusively, with those two groups. I hear their pain, and I feel for them. I listen to their grievances and attempt to be encouraging and positive. Often, they tell me my coaching and mentoring are helping them move forward. I provide them with tools, resources, information, knowledge, and at times connections and leads via my extensive LinkedIn and personal networks.

Many of my clients are getting job interviews, and for them I provide interview tips by means of certain interviewing techniques, and I help them formulate strong interview answers based on their individual circumstances. When I hear someone tell me about receiving a job offer, I know the client will be moving from one of those groups to the other. And the news is music to my ears.